Nineteenth-century German intellectual fraud Karl Marx stipulated that there was an inherent conflict in the capitalist system between workers and their  bourgeoisie overlords. That's not now and never has been the case. The actual conflict is between the blue collar workers that deal with reality and their white collar counterparts that deal with abstractions, generally in a bureaucratic model. The owners of capital are bemused bystanders.

An example of the dichotomy between these two groups is plainly visible in the construction industry. The men and women that build the structures in which white collar workers later spend their time endure conditions that their bureaucrat brothers would refuse. It's not the work itself that's the issue, however. It's the workplace environment when no work is taking place. 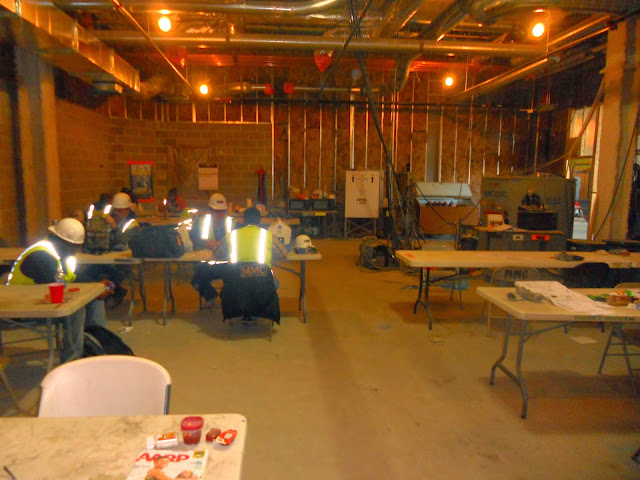 D
During the construction of a new hospital workers assemble in this room each morning. It is the assigned space for breaks and lunches. Light is provided by half a dozen 60 watt bulbs hanging far above the floor, which is cleaned perhaps weekly. If food were being sold in this room, state health authorities would close the facility for sanitary reasons. 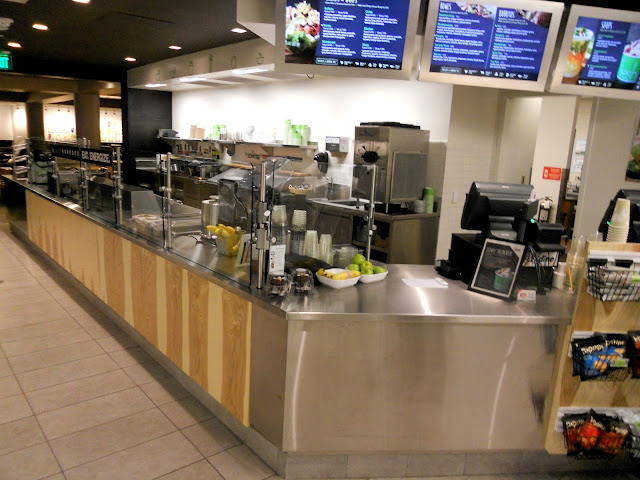 This is the dining facility at an existing hospital nearby. It caters to employees, patients and visitors. 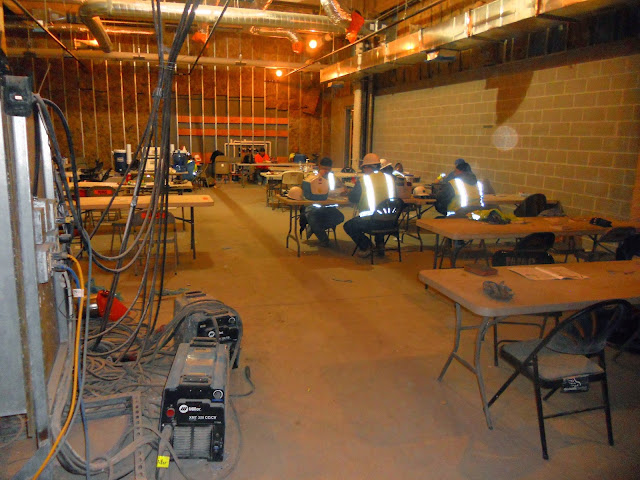 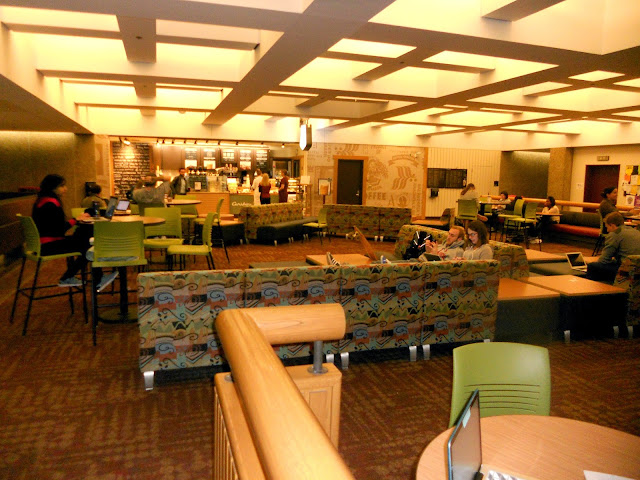 The lounge at the nearby hospital. 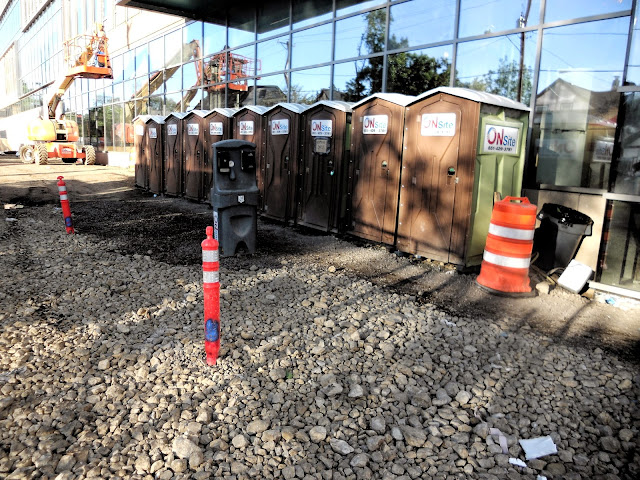 Typical toilet facilities provided for construction workers. If this is sufficient for them, why is it necessary to provide more sophisticated and sanitary ones for the later occupants? 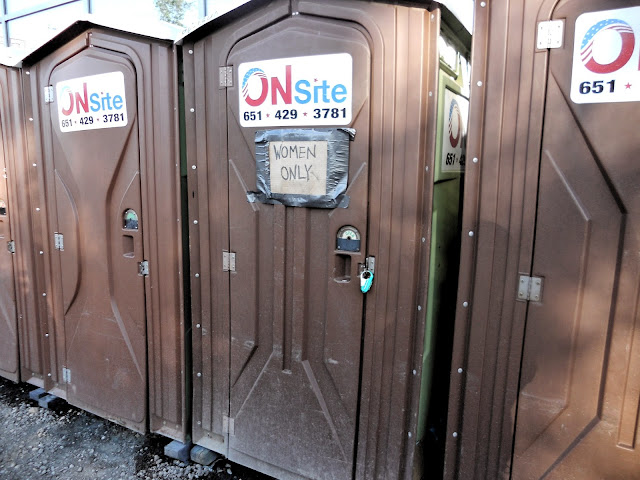 Why is one toilet reserved for women? And why is it secured with a combination lock? Do the workers in the plant that builds the porta-potties also perform their body functions in them or do they have real toilets? If for some reason one's toilet no longer functioned could they put a porta-potty next to the driveway and use it on a permanent basis? 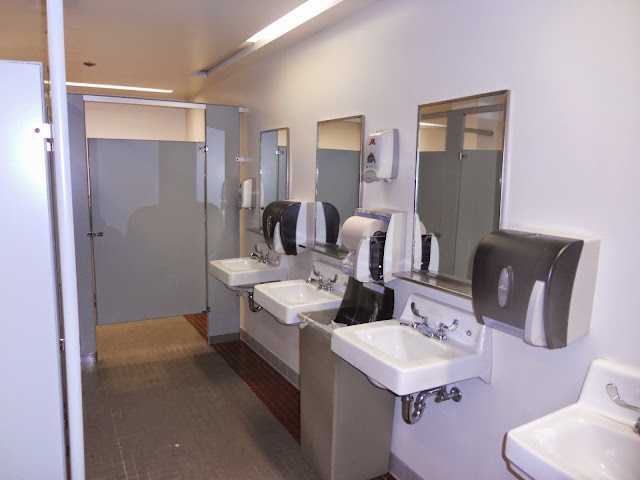 The men's room at the nearby hospital. Women have a similar facility adjoining. It isn't locked.

Construction workers expect and accept dangerous, difficult and dirty working conditions. That's always been the nature of the business.  At the same time, why should they accept unsanitary rest  rooms and filthy, uncomfortable, poorly lighted break rooms? It could be said that these conditions are temporary. While everything is pretty much temporary in the big scheme of things, for construction workers this is a permanent feature of daily existence. When this project is completed, the next one will have portable toilets and filthy break rooms as well.

There's been an international conversation over income inequality. When will there be one about addressing the disparities in conditions between white collar employees and the people that build their facilities?

In Singapore, future residents of an up-scale housing project have discovered the conditions under which the workers that are building their homes exist and are at least recognizing the situation as we see here.
Posted by Pulverized Concepts at 6:44 AM

One nice thing about capitalism, though, is it lets people sort themselves into occupations based on what they care about. My sister got depressed every time she went into the employee entrance of our plastics factory and into the fluorescent lights; I never thought twice about it. I got to park my bike right next to the door, and compared the brightness favorably to what it would have been a century ago. My personal toilet is probably less sanitary than these public ones, and I just don't care.

I just got a different job where they have nice toilets, and I kind of think that in an office job, where unlike a factory or construction site you don't get to see what you made at the end of the day, the perks are kind of a sign that yes, you are doing something people value, you can tell by the status you're afforded. (Also office workers aren't covered in dirt and oil when they walk in so the niceness lasts longer.)

Anyway, thanks for actually showing some concern for construction workers. We do have enough money to treat them better.